Head to Castaways for the 2019 Chicago Air and Water Show 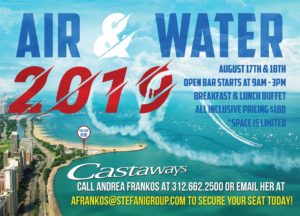 Chicago is known for our summer events! One of the biggest events is right around the corner! The 60th annual Chicago Air and Water Show at North Avenue Beach is scheduled for August 17th and August 18th from 10 am to 3 pm.

History About the Chicago Air And Water Show

Starting in 1959, at Chicago Avenue and Lake Michigan, the Air and Water Show, was first called the Lakeshore Park Air and Water show. The event started as a celebration for the children participating in the Chicago Park District day camp program. The first show featured performances from divers, water skiers, and the Coast Guard Air Sea Rescue, games and a diving competition.

Over the years, the event has become a Chicago tradition and was renamed to the Chicago Park District Air & Water Show, expanding to two days and moved to the current location at North Avenue Beach.

From Fullerton to Oak Street, North Avenue Beach is the focal point for the event. Phil Stefani’s Castaways Bar and Grill sits in the center of North Avenue Beach, and the party will be happening all weekend long. The beachside bar and grill is known for a great menu full of delicious burgers, salads, sandwiches, drinks and more. Not only will Castaways have all of the snacks and meals you crave, but we’ll also have special entertainment all weekend long, to help you party beachside. Purchase your tickets now, for $180 which include a breakfast and lunch buffet, an open bar starting at 9 AM and more.

Parking: The best options on where to park are the Millennium Park and Millennium Lakeside Garages located at 5 S. Columbus Drive, where you can pay $30 for the whole day and take a free shuttle from Millennium Park to North Avenue Beach.

Biking: Divvy Bikes will offer its valet service at select stations Saturday and Sunday. Locations include Theater on the Lake, Clark and North, Michigan and Oak and Streeter and Illinois.